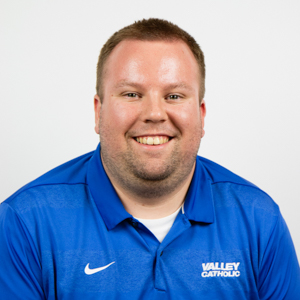 History Teacher and Boys Basketball Coach | Patrick Chapman joined Valley Catholic’s faculty in the fall of 2016. He teaches Government and Modern World History. Mr. Chapman previously taught at Monroe Catholic Jr./Sr. High School in Fairbanks, Alaska, where he was in both the PE and History departments. Mr. Chapman also served as Assistant Athletic Director for a year, and continues to help with many athletic events at Valley Catholic. Mr. Chapman is a proud graduate of the University of Portland where he received a B.S. in Secondary Education and History, and has since gone back to get a Masters in Education (M.Ed) and Administrative Credential. Mr. Chapman also serves as the Head Boys Basketball Coach at Valley Catholic. Mr. Chapman had previously been the assistant coach for the Valiants from 2016-19. Before coaching at Valley, Mr. Chapman was Assistant Boys Basketball coach at Monroe Catholic for three seasons where he was a part of the 2014 State Champion and undefeated season for the Rams. Prior to coaching in Alaska, Mr. Chapman was an assistant coach at Central Catholic High School, his alma mater, where the team won the Mt. Hood Conference championship each season and earned 2nd place in state in 2013.