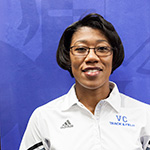 Track and Field Coach | Marcia Bomber attended La Salle High School, where she was a state competitor in the shot put, discus and 4x100m relay. She graduated from Portland State University in 2002 with a bachelor’s degree in biochemistry. She walked on as a track and field athlete at PSU as a freshman and was awarded a scholarship for the next three years. Marcia held PSU records in the weight throw and the 4x100m relay. This will be her 10th year as an assistant coach at Valley Catholic. Coach Bomber, who works with Valley Catholic sprinters and throwers, has helped the Valiant girls team to five consecutive league championships and, in the last two seasons, a State Championship and State second-place finish.