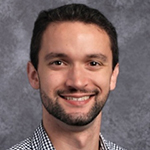 Director of Admissions | Kalani Efstathiou ’06 now serves as the Director of Admissions. He came back to campus in 2015 to teach math at Valley Catholic Middle School and served as the Math Department Head for two years. Kalani is a returning alumnus of Valley Catholic High School and was involved in athletics and served as the Student Body President during his time at VCHS. Kalani continued his studies at Sacred Heart University where he graduated with a bachelor’s degree in Mathematics in 2010. During his time at Sacred Heart University, Kalani received the Outstanding Achievement Award for his research in mathematical proofs and was also awarded the Silver Medal of Excellence by the mathematics department. Kalani returned to Sacred Heart University as the Head Men’s Volleyball Coach for three years before moving back to Oregon to raise his family. Kalani now coaches volleyball at Valley Catholic High School and for a local club. He is married to fellow VCHS graduate Katherine Efstathiou (Bamford) ‘06 and is the father of Lucien and Logan, who attend Valley Catholic School as well.