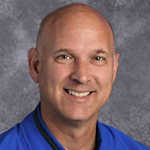 Director of Athletics | Joel Sobotka came to Valley Catholic in 2012 as athletic director and head boys basketball coach from the University of Portland, where he had been top assistant and recruiting coordinator. Joel has 18 years of college basketball experience, including four years as a Division I head coach at Portland State University (PSU). When hired in 1998 at the age of 28, he was the youngest D-I head coach in the country. Joel has also coached at Eastern Oregon University, Cal State Northridge, and Arizona State. While at PSU he served as college and NBA analyst for 1080 the Fan. Joel graduated from Arizona State University in 1993 with a bachelor’s degree in business management. He was a founding board member of the Oregon/Southwest Washington Chapter of the ALS Association, with which he is still actively involved. He was selected in 1999 by Oregon State Senator Ron Wyden to lead the Backboards and Blackboards program, which educates children on academic and basketball goals and opportunities. He has also been camp director for the Chris Dudley Basketball Camp for Kids with Diabetes and worked with the Special Olympics Youth Games in Beaverton. In 2014 Joel led the Valiant boys to the state championship and was named Oregon’s Boys Basketball Coach of the Year.