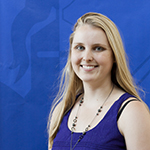 Dance Head Coach | This is Jessica Anderson’s eighth year with Charisma, Valley Catholic’s dance team, and her seventh year as head coach. In 2010, Coach Anderson led the Valiants to the first dance state championship in school history and to successful defenses of the state title in 2011, 2012, and 2013. The team added state championships in 2015 and 2016 and won second-place honors at state in 2009, 2014 and 2017. Coach Anderson and her assistant coach Megan Hoffman were selected as the 2009-2010 Valley Catholic Coaches of the Year. Jessica Anderson was also named OSAA 4A/3A/2A/1A Coach of the Year in 2013. Jessica was an assistant coach at Wilsonville High School in 2003-04 and a three-year member and a captain of the Wilsonville dance team, earning State Championships in 1999 and 2000. Jessica graduated from Oregon State University in 2005 with a bachelor’s degree in biology and a minor in psychology. She performed with OSU’s Elite dance team in 2004. Active in the Dance Drill Coaches Association (DDCA), she is an advocate for all 1-4A dance teams and frequently serves as a tryout judge for team selection. In 2011, Jessica completed her doctoral studies in naturopathic medicine.