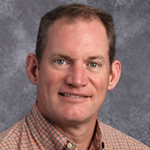 VCMS Assistant Principal | Dale French is the Vice Principal at Valley Catholic Middle School. He has been at Valley Catholic since 1999, the first three years as a coach on the boys basketball staff that directed Valley Catholic to its first district championship and appearances in the state tournament. In 2002 Dale became VCHS athletic director, where he remained until 2005 when he moved into the front office to become their dean of students/vice principal. He became VCMS’s first full-time VP in 2014. In 1992, Dale graduated from the United States Air Force Academy, where he was a four-year letter winner and, in his senior year, Most Valuable Player for the Falcons basketball team. Dale received his master’s degree in athletic administration from the University of Northern Colorado in 1993. He received his Education Administrator’s license through the University of Portland. He retired as a Lt. Colonel after serving for 20 years as an Intelligence Officer in the active-duty Air Force and Air Force Reserves. Dale and his wife Kate’s two children both attend school on campus and are members of the Class of 2021 (Will at VCHS and Addison at VCMS). He is also the head track and field coach for VCHS.