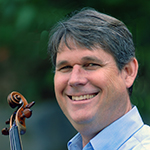 Violin | A California central-coast native, Chris Swanson started Suzuki-method violin at the age of 4 with Carol Kersten, and later studied with Ronald Copes (current member of the Julliard String Quartet), at the University of Texas at Austin, Indiana University at Bloomington (where Christ received his bachelor’s degree in music), and Oberlin College (baroque violin). He has taught violin to students aged 3 to 68 in the United States and Japan (in Japanese), and has over 30 years of experience performing and recording orchestral, chamber, film, musical theater, and early music. Chris also plays violin and electric violin in popular and improvisational styles such as blues, jazz, rock, pop, folk, and country. After living in Japan for 10 years, Chris returned to California where he taught violin and English as a Second Language in the Southern California area for seven years. He recently moved to the Portland, Oregon area with his wife and young son. He is enjoying exploring the area and excited to be joining the Valley Catholic community.