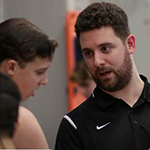 Swim Head Coach | Ben Karlin is excited to begin his fourth year as the new head coach for boys and girls swimming. Ben attended Valley Catholic School from 1996 until 2002. He graduated from Linfield College in 2008 with a Bachelor of Arts Degree in theatre. Ben began his swimming career at the age of 5 with the Multnomah Athletic Club (MAC) and finished under Head Coach Alex Nikitin. Ben was lucky in his time at the MAC to have the opportunity to be critiqued by world-renowned stoke technique specialist Milt Nelms, who has helped former, current and future Olympians achieve their goals. Ben had the opportunity to attend a coach’s clinic in September 2011 where he was happily surprised to see his former MAC coach Alex, along with Milt Nelms and Olympic medalists Caitlin Leverenz and Dana Vollmer. His high school swimming career was led by former Valley Catholic chemistry teacher and then Head Coach Bryan Butcher.