Our alumni are a vital part of the campus community.

We were privileged to share in your early education, and we delight in keeping in touch with you now. Our prayers go out to each of you for continued growth, health and peace.

Please visit our alumni pages often to find information about reunions, events, volunteer opportunities and countless ways you can connect with the Valley Catholic community.

We offer a variety of events for our alumni year-round! Visit this page often to stay up-to-date on events. If registration or an RSVP is required, we will include the links here.

Want to get your class together for a reunion? We can help! Contact [email protected].

Due to COVID-19, all in person events are on hold. Please keep an eye on this page for virtual events until we can safely gather in person again.

Volunteer With Us
If you are interested in volunteering at an alumni event or serving on the Alumni Advisory Committee, please contact the Office of Alumni Relations:
503.718.6482 or [email protected]

Inspire Today’s Valiants at Career Day
Every other Spring, Valley Catholic hosts a career day for high school students. If you are interested in presenting on your career for the next Career Day, contact Andy Haugen.

The Alumni Challenge is an annual campaign to raise funds for tuition assistance. The OCF Joseph E. Weston Public Foundation proposes a goal each year and promises to match the funds raised up to that goal amount. The 2020 goal is $75,000. Click here to make your gift today! Donations must be made by September 15, 2020 to qualify for the dollar-for-dollar match.

The Annual Fund directly supports Valley Catholic School, Maryville Nursing Home, and the Sisters’ outreach ministries. Gifts are used to help offset operational expenses. Every gift to the Annual Fund benefits those we serve in a direct and powerful way. We hope all who have been enriched by the mission and vision of the Sisters of St. Mary of Oregon will participate in the Annual Fund at the level they are able. You may designate your Annual Fund gift to a specific sponsored ministry or give to “the greatest need.” Make your gift here.

The Alumni Advisory Committee began in January of 2018. These alumni meet quarterly to plan and execute alumni events, the Distinguished Alumni Award and the Weston Challenge campaign for tuition assistance. Each member engages in one of the three subcommittees. If you are interested in joining the Alumni Advisory Committee please contact the Alumni Relations Office: [email protected] 503.718.6482

Classes typically hold reunions in 5 or 10 year intervals. If you want to plan a reunion or want information on if your class is holding one, please contact us at [email protected] or 503-718-6482. Our campus is available for classes who want to hold their reunions on campus, have a tour of campus, or both!

Classes typically make a Class Gift to a specific named fund, scholarship, or simply as a gift of cash to Valley Catholic. Discuss with the Alumni Relations Manager ways to best allocate a gift from your class reunion to Valley Catholic.

The Distinguished Alumni Award is presented by Valley Catholic School and the Sisters of St. Mary of Oregon Foundation to graduates who excel in their life’s work, demonstrate a high standard of personal integrity, strive for excellence and live a valiant life. It is presented annually during Catholic Schools Week.

This year’s theme, chosen by the Alumni Advisory Committee, is Fine Arts. Nominations will open up in October. Links to the form will be available here as well as emailed out to alums.

The Distinguished Alumni Award is presented by Valley Catholic School and the Sisters of St. Mary of Oregon Foundation to graduates who excel in their life’s work, demonstrate a high standard of personal integrity, strive for excellence and live a valiant life. It is presented annually during Catholic Schools Week.

Honorees (by academic year) include:

Bobbie Barsotti Weber ’62 is an innovator in the field of early childhood development and family education. She has positively affected the lives of thousands of children and families through her scholarship and leadership on both national and regional levels. She served as the president of the National Association of Childcare Resource and Referral Organization from 1990-1995. Bobbie was one of the founders of the Childcare and Early Education Policy and Research Consortium, which functions on both the state and national levels. She served 7 years on the Oregon Governor’s Early Learning Council, whose purpose is to shape and set policies for children and families in the state of Oregon. Bobbie also helped establish the Oregon Childcare Research Partnership which is still operating after 29 years.

For more than a decade, Frank So ’97 has headed up humanitarian and development projects in some of the most impoverished and war torn nations in the world. His humanitarian work includes over four years working in Sudan and Darfur with the United Nations and with USAID, leading post-earthquake reconstruction efforts in Haiti. Frank served in Honduras as USAID Advisor for Justice and Human Rights. He is on the advisory board of the Red Sweater Project, an organization dedicated to developing quality, sustainable, and accessible schools for East African children. He is also advisor for VIDES+USA a Catholic Volunteer Missioner Program.

Jesyca Durchin Schnepp ’87 has been an entertainment professional since 1991. She worked for Mattel Media, where she produced many of the successful Barbie Software titles, before founding her own companies: Nena Media and Digital Playspace. Her clients have included Mattel Entertainment, Walt Disney Imagineering and Paramount Digital.

Father Jeff Meeuwsen ’95 is currently pastor of St. Elizabeth Ann Seton Catholic Church in Aloha, Oregon. He has served at parishes across Oregon and studied at Gonzaga University, Mount Angel Seminary and the Pontifical University of St. Thomas Aquinas in Rome.

Marlene Schmidt Duyck ’59 was honored for spending “her entire adult life devoting herself to her family and the church.”

Dr. Richard Church ’95 was honored for his work as a physician at the University and Memorial campuses of the University of Massachusetts Medical Center.

Pamela Martes Olberding ’62 established the Mike Olberding Education Fund in memory of her husband. The fund supports the educational needs of nurses, technicians and other employees at Providence Newberg Medical Center.

2011-2012 | Valley Catholic honored the Sisters of St. Mary of Oregon (SSMO) who graduated from the SSMO campus schools.

Pat Roshak Joyaux ’54 is secretary and registrar at Valley Catholic. Since joining the staff in 1978, she “has helped thousands of students and parents on a daily basis…simply being a posi­tive, helpful person who knows the answers to all the possible questions that come through her office.”

Mariel Zagunis ’03 is a two-time Olympic champion in women’s sabre. 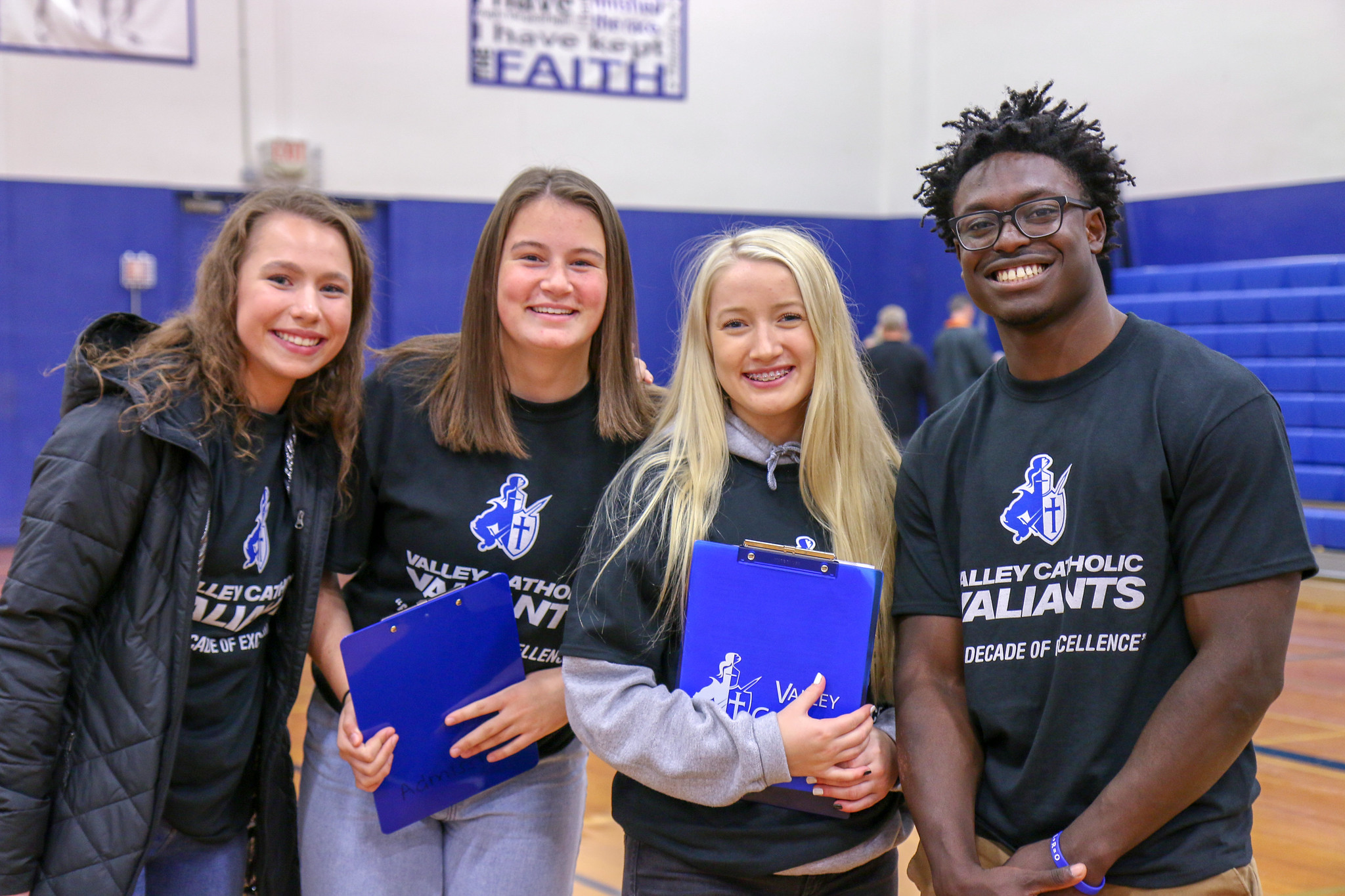 Please join us for our live Virtual Open House on Sunday, October 25! Join our event at 1 p.m.